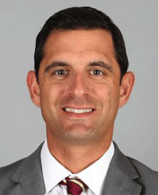 Coach Trezza joined BC as the pitching coach, catching coach, and the associate head baseball coach in July 2016.   He has 8 years of coaching experience and 12 years of professional playing experience.  Before his coaching days, Trezza was a standout player at Stony Brook, earning Freshman of the Year honors in 1999 after hitting 17 home runs and driving in 55 RBIs as a shortstop. In 2001, he launched a program-best 23 home runs and was named the school’s first All-American after moving behind the plate and playing first base. Trezza was drafted in the 18th round by the Detroit Tigers following his junior year and played four seasons in the organization. Coach Trezza has quickly earned the reputation as an excellent clinician and has spoken at the World Baseball Coaches’ Convention.  The MBCA is proud to welcome Coach Trezza to the Boston area as he speaks on how to develop your pitcher-catcher relationship.