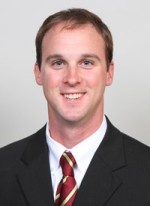 The MBCA is excited to hear Coach Sullivan talk about how to maximize the development of outfielders as he has become one of the top coaches in the ACC at developing outfielders.  Lexington HS graduate Chris Shaw (2015 1st Rounder of the SF Giants) developed his outfield skills under Coach Sullivan after coming in as an infielder.  Before coming to BC, Sullivan spent four seasons as the head coach at Newbury College where he was named the National Coach of the Year by the Association of Division III Independents in 2008.

A 2006 graduate of Eastern Connecticut State, Coach Sullivan was a four-year starter for Bill Holowaty and led the Warriors to three Division III national tournament appearances. He was also the recipient of the Francis E. Geissler Sportsperson of the Year his senior year, as well as the Rick Ganoe Coach’s Award and was named the team captain.