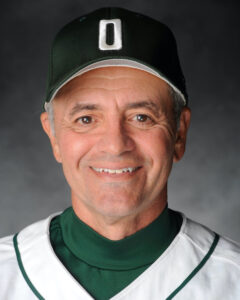 Joe Carbone spent 24 seasons in the dugout as the head baseball coach of his alma mater, Ohio University, compiling a 689-611-2 (.529) overall record from 1989-2012. His 689 wins make him the winningest coach in any sport at the institution and place him third all-time in Mid-American Conference (MAC) history. Additionally, his 368 conference wins rank second in MAC history.

During his tenure, Ohio won two MAC titles and Carbone was named MAC Coach of the Year twice (1991 and 1997). He was also honored as the ABCA/Diamond Mideast Region Coach of the Year in 1997, following the Bobcats’ record-setting 43-win season.

Carbone took over the Bobcats’ program after 18 years as an assistant coach at Marshall, Toledo and Ohio State. During his stint with the Buckeyes from 1977-88, Carbone was very active in collegiate summer leagues. He was a coach and general manager of the Columbus All-Americans, also helping to develop the Great Lakes Summer Collegiate League in Michigan and Ohio. For Carbone’s accomplishments and continued commitment to development of the GLSCL, the league named the Manager of the Year Award after him in his honor.

Carbone has been a frequent speaker at coaches’ clinics across the United States and Canada. He has produced baseball videos and publications and has also spoken at the ABCA Convention four times.