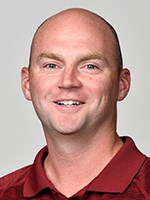 Matt Reynolds, a former infielder and captain for the Minutemen, was named the 15th head coach in the history of the University of Massachusetts baseball program on May 26, 2017.

Reynolds’ ball club took another step forward in the 2019 season with its first Beanpot Championship since 2012. The Minutemen were 4-1 against teams that ultimately reached the NCAA Tournament and continued to show upward momentum as the year progressed.

Reynolds returned to his alma mater after a three-year stint as head coach at Washington College (2015-17) in Chestertown, Maryland, and seven seasons as an assistant coach at Navy (2008-14). In his first season as head coach, he guided the Shoremen to their first winning record in three years (19-15). He followed that performance up with a 26-win effort in 2016, the team’s second-highest win total ever.

With Reynolds providing hitting instruction, the Midshipmen set a number of offensive team records and top 10 all-time team totals during his tenure. In his first season, the Midshipmen broke school records for hits, doubles, home runs, RBI and total bases.

Reynolds served as a graduate assistant under Mike Stone at UMass for three seasons (2005-07). He worked with infielders and hitters while assisting with recruiting. He played his final two collegiate seasons in Amherst after transferring from the University of Maine. He earned Atlantic 10 All-Tournament Team honors in 2003 and was named the Minutemen’s Most Valuable Player the following season.