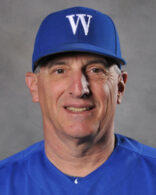 Pete has been involved in coaching for more than two decades, is responsible for the development of all infielders and outfielders in addition to assisting with recruiting.  Since 2004, he has served as an assistant coach with the Harwich Mariners of the prestigious Cape Cod Baseball League (CCBL) after coaching in 1991 with the Yarmouth-Dennis Red Sox. Between 1988 and 2004, Pasquarosa coached at Franklin High School, including heading the varsity team for the final 13 years of that stint. Pasquarosa was also the school’s athletic director from 1992-2001. In 2000, he was honored as an American Baseball Coaches Association (ABCA) regional coach of the year and earned a top coaching accolade from the Boston Globe. Two years later, Pasquarosa was lauded at Fenway Park for earning a statewide sportsmanship award. Pasquarosa served as the head instructor for the Franklin-based Tri-Valley Baseball camps from 1988-2003 and was the director of baseball clinics at Boston College in 2005 and 2006. He also spent time as a Bay State Games coach from 1994-2003. Beyond coaching, Pasquarosa has produced articles that have been published in coaching and physical education publications while also speaking at major coaching functions.  The MBCA is excited to have one of its HOF members present on preparing infielders through repetition at the clinic.