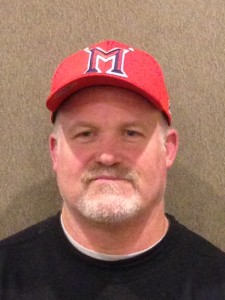 Steve Freker has been serving as a varsity high school coach for the past 31 years. After a 15-year stint at Malden High, Coach Freker headed the Malden Catholic program for the next 13 years and nearly 200 wins. Since the 2013 season “Frek” has led the Sachems of Saugus High. Along his coaching journey Steve’s teams have won 299 games and made 20 MIAA tourney appearances, winning an amazing 56 postseason playoff games. Among his team’s many achievements are seven sectional finals, four North Sectional titles and a State Division I Championship in 2003. Steve was named Division 1 “Coach of the Year” twice by the Boston Globe, in 1994 at Malden High and in 2008 at Malden Catholic.

Coaching rival Gerry Lambert says “if you’re going to beat a Freker-coached team, you’re going to have to earn it, over every pitch, every out, every inning. Steve’s teams always battle, they never quit. Not only does he develop the physical talents of his players but also his expectations of improvement and excellence are a reason his teams have such an exceptional record in the postseason.” Coach Lambert also pointed to the fact Steve has made it a mission to help guide players to the next level, assisting over 100 college players and 10 MLB draftees, including two Major Leaguers.

Steve also coached over 20 years in H.S. football and basketball and has coached Senior Babe Ruth baseball in Malden for 33 summers, with over 600 victories, 10 state titles, 5 New England crowns and one national title game. Also our longtime MBCA Treasurer, Steve Freker has deservedly earned a spot in the Coaches Hall of Fame.