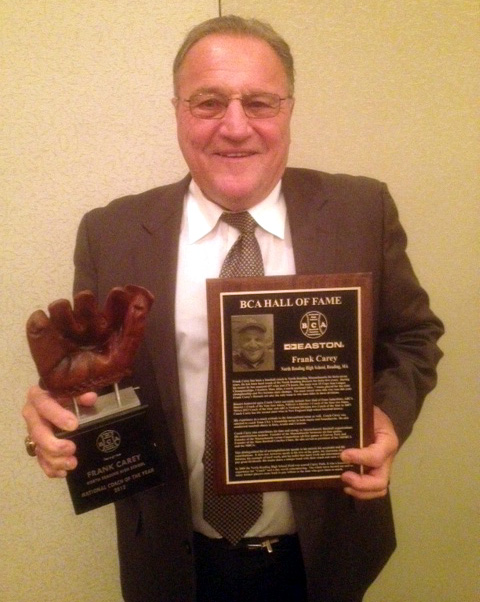 Frank Carey from North Reading High School was inducted into the BCA National Hall of Fame and was named the District 1 Coach of the Year.

Frank Carey was also named the BCA National Coach of the Year.

The MBCA would like to congratulate Frank Carey for these well-deserved honors.

North Reading baseball coach Frank Carey was recognized by his peers as the National High School Baseball Coaches Association’s Coach of the Year at its convention in St. Louis earlier this evening. The head coach at North Reading for the past 47 years, Carey guided the Hornets to the Division 3 state title this past season.

The honor capped off a special weekend for Carey, who was inducted into the National High School Baseball Coaches Association’s Hall of Fame. During his tenure, he has amassed 697 wins and 270 losses. His team won 25 Cape Ann League Championships, three Eastern Mass. titles, four North sectional titles and five state title. Carey’s Hornets are also the only team to win state titles in three divisions.

His experience as a coach extends to the international scene as well. Carey was selected to coach Team USA ’s friendship series in both Japan and Scandinavia. He also conducted baseball clinics in Italy, Aruba and Curacao.